We welcome in the new decade of 2020 with exciting events in the upcoming months beginning in February with American Heart Month. Traditionally, February is the month for lovers and all things heart related. February 1st is National Wear Red Day to bring awareness about heart disease. Heart disease is often associated with men, but cardiovascular disease if the number one killer of women.

On March 8th we celebrate women's achievements throughout history internationally. In past years, our Local Organization has dedicated part of the March program to present a brief biography of one's favorite woman in history and even dress as they did to bring awareness of their accomplishments. March 31st is known as Equal Pay Day for 2020 which means women must work until that day to earn the same amount of money that men received in 2019. Last year, Equal Pay Day was April 2nd. Hopefully, in the near future, we will be able to have true equality in the workplace.

In June, BPW will hold it's annual State Conference to be held in Wesley Chapel at the Saddlebrook Resort which is about 90 miles North of us. Continuation of BPW's One Hundred Year Celebration will occur in addition to election of new Officers, seminars, business meetings and an excellent time to meet and greet other Beautiful Professional Women living in other parts of Florida. You may want to come before the conference begins on June 11th or stay after the 14th at the discounted hotel rates. 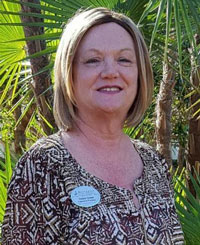 Thank you to all who have helped with the statewide membership drive. I am very pleased to announce that we have 4 new members - so far...

Welcome to Carol DeGulis, Dr. Karen Helmick, Sue Hogrefe, and Karla Olson. We are very excited to have these four dynamic women as a part of BPW Englewood/Venice!

We will hold a new member induction ceremony at our meeting on January 21st, so plan to be there.

Giving is Better Than Getting?

We all struggle with believing that giving is better than getting. We love the security of having things beginning in our childhood with having the best and most toys and continues into adulthood. We are addicted to the emotional boost of buying something new economically. Non-economic forms of giving such as giving encouragement, attention and compliments can also be better to give than receive.

In a 2002 survey by the National Opinion Research Center's General Social Survey, it was found 43% of people who gave blood two or three times a year were very happy as opposed to 29% who did not.

The journal Health Psychology published a study in 2012 that found people who regularly volunteer live longer. If you volunteered for any reason beyond the joy of giving, it did not have the same long term benefits as giving unselfishly. Giving also helps combat depression.

The "pay it forward" idea isn't a myth. It is a fact that when people experience a generous kindness, they are more apt to treat others with the same sort of benevolence. Cooperative behavior is infectious and spreads through social networks.

Giving increases our confidence by focusing on others and not on self. It is important to have a strong sense of self-awareness, but that inner voice can be a constant force for criticism and negativity. Being generous changes where we place the spotlight and gives our brain a positive argument for why we are not a bad person.

When you are a genuinely generous person, people find you trustworthy and kind and like-able. Isn't that what we should be focusing on not just this time of year, but year round?

Four lucky ladies were awarded the Business and Professional Women of Englewood and Venice (BPWEV) Christine Davis Memorial Adult Learner Scholarships in the amount of $1,000.00 each this year. They are Allison Hinshaw, Christine Pomerleau, Oksana Zimin,and Stacey Chaisson. Two are attending State College of Florida, two Florida International University. Their field of study varies from nursing, to early childhood education to school administration. Recipients have to either reside in Sarasota or Charlotte County. The BPWEV members worked hard raising the money for these scholarships through several fundraisers, the annual Wine tasting/Auction and a Hats off to Women Workshop being the most popular ones. BPWEV meet every third Tuesday of each month at the Left Coast Seafood Restaurant in Venice.

The public is invited to all meetings. The mission of BPWEV is: “To achieve equity for all women through Advocacy, Education and Information."

Happy New Year to All!

I don’t know of anyone who was not looking forward to putting behind the challenges of 2020. COVID-19 redefined the way we conducted our daily lives. Those of us who have family in other states were unable to be with them because of the many travel restrictions. Video chats became the norm and thankfully, we remained connected through different channels. Many things changed in 2020, but for the most part, we came to realize the importance family and friends play in our lives. Neighbors became closer, took longer walks together and found many areas of common grounds.

The members of BPWEV grew closer, too. When we resumed our monthly meetings in June, first time guests quickly became members. They all said, “what a welcoming group!”. We learned what a difference a simple smile can make to guests walking into our meetings for the first time. We learned to talk a little less, listen a little closer and make each other feel special. When we could not hug, we let each other know how good it felt to be with one another. We encouraged, lifted and reminded each other that we would get through the tough times together. We were determined to raise money for scholarships, and we did. One of the many lessons I learned from 2020 is that our local organization is stronger and closer than ever. Our members are resilient, committed and help to make our communities better. I have no doubt our LO will continue to grow and prosper.

BPW Englewood/Venice, the best is yet to come!